Sentosa has come a long way since the days of being known as Pulau Blakang Mati (or “Death from the Back Island” in Malay). Instead of today’s leisure destination filled with family-friendly attractions, Sentosa was once an ordinary fishing village and a military base. And it is apt that on her 50th birthday this year, that the NEW Sentosa Heritage Trail is launched. Featuring 30 heritage sites – including the recently gazetted National Monument Fort Siloso – and supplemented by 10 heritage trail markers, the Sentosa Heritage Trail, traces the transformation of the island from a military complex to a leisure destination, uncovers stories of the communities who once lived there, and sheds light on the story of modern Sentosa’s reinvention. 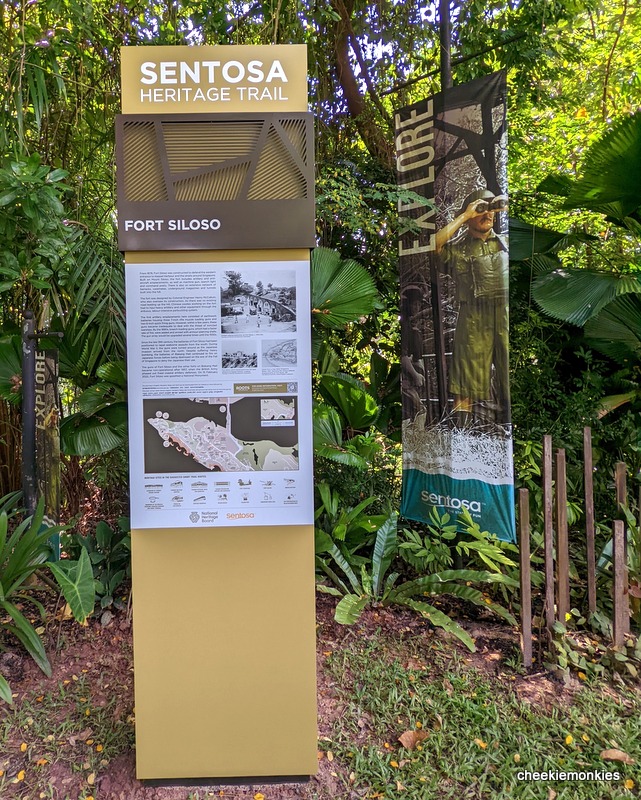 Developed by the National Heritage Board (NHB) in partnership with Sentosa Development Corporation (SDC), the Heritage Trail comprises of three thematic, bite-sized routes according to one’s interests. Visitors can pick either one, two or all three and go on them in their own time.

So it doesn’t matter if you’re an active hiker or not. Simply select the route that you like the most and go explore with the family!

If you want to delve into the war history of Sentosa, then this is the trail to choose!

This route explores the extensive fortifications on Sentosa, including Fort Siloso, Imbiah Battery and Fort Serapong, and how they featured in the defence of colonial Singapore.

Pulau Blakang Mati had been identified as a potential defence outpost since at least the 17th century. However, it was only in the late 1800s that the island was militarised, with artillery batteries, forts, barracks and other infrastructure constructed by the British after they took over Pulau Blakang Mati. 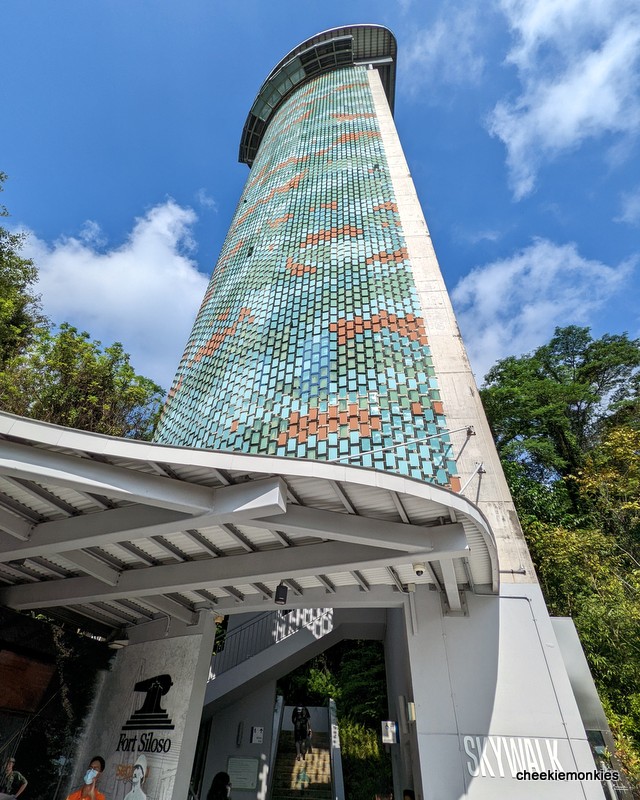 Head to Fort Siloso Skywalk and ascend the tower for sweeping views of Keppel Harbour and the straits around Singapore. 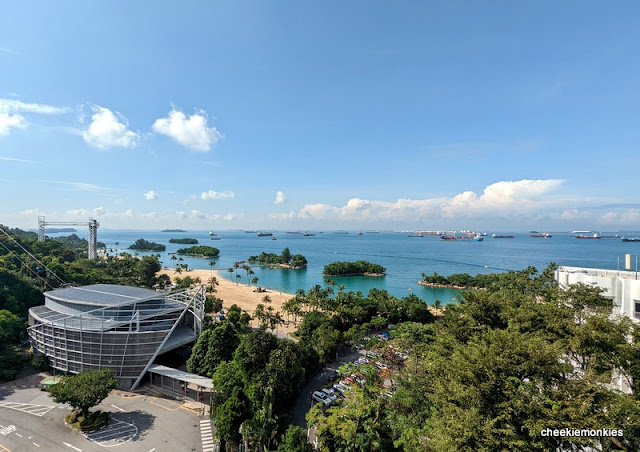 Enter Fort Siloso via the Skywalk to explore the only preserved coastal fort in Singapore. Fort Siloso was constructed from 1878 and its artillery emplacements protected the western entrance to Keppel Harbour and the surrounding straits. 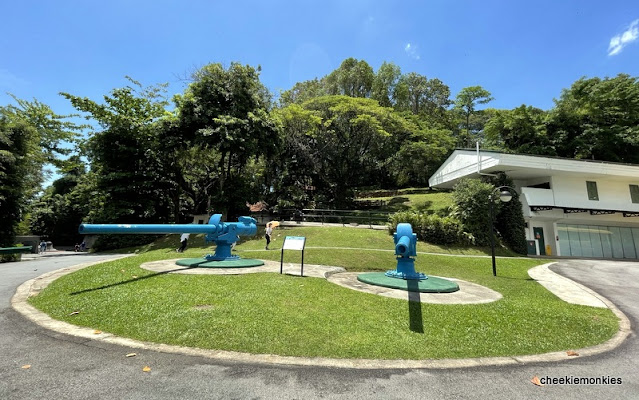 ● The Fortification of Pulau Blakang Mati 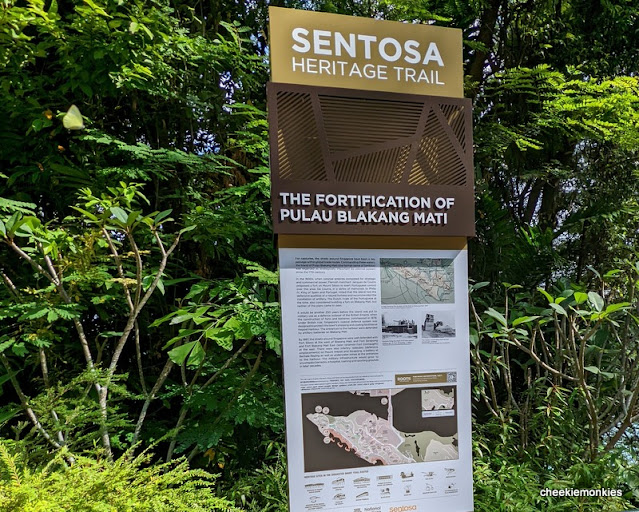 Leave the fort through the Guardroom exit, which was the fort’s original entry point. Here, you will find a trail marker detailing the fortification of Pulau Blakang Mati. In the 1800s, the British constructed Fort Siloso, Imbiah Battery, Fort Serapong, Fort Connaught, as well as a battery at Berhala Reping and other military infrastructure. 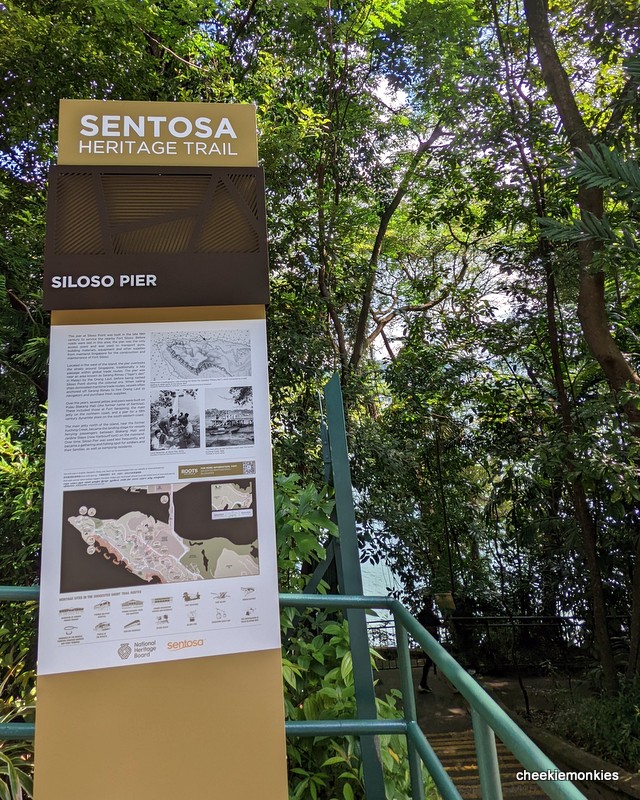 Continue down Siloso Road to reach Siloso Pier, a lesser-known gem on the island. Here, you’ll find a trail marker exploring the history of this pier and others on Sentosa. Siloso Pier was constructed from 1878 to service the nearby fort, and is located near the western end of the island known as Sarang Rimau (“tiger’s den” in Malay). Before roads were laid on the island, the pier was essential for the construction of Fort Siloso.

In fact, one can still see the remnants of the pier at low tide! 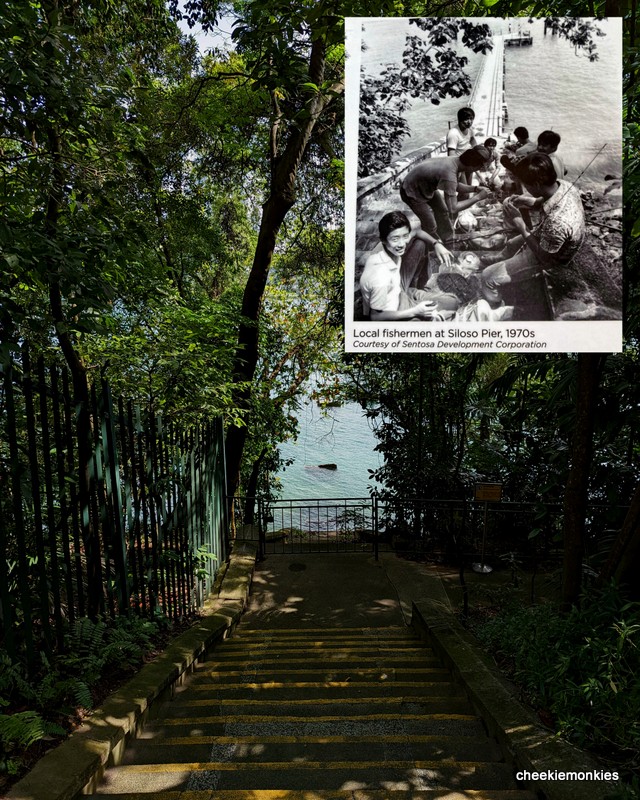 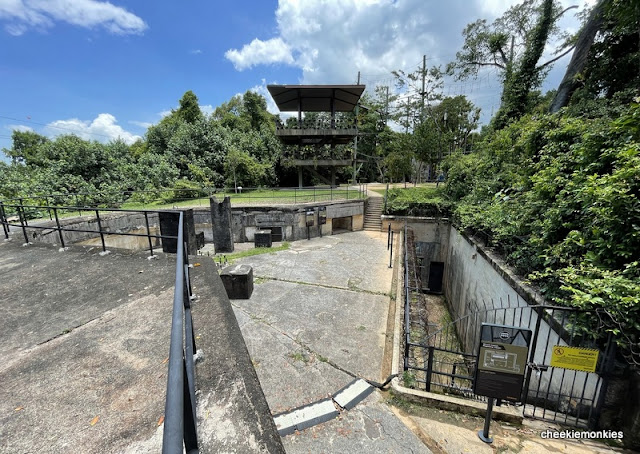 Access the Mount Imbiah Nature Trail via Siloso Road, and take an uphill stroll towards the former Imbiah Battery, which is next to Mega Adventure Park. 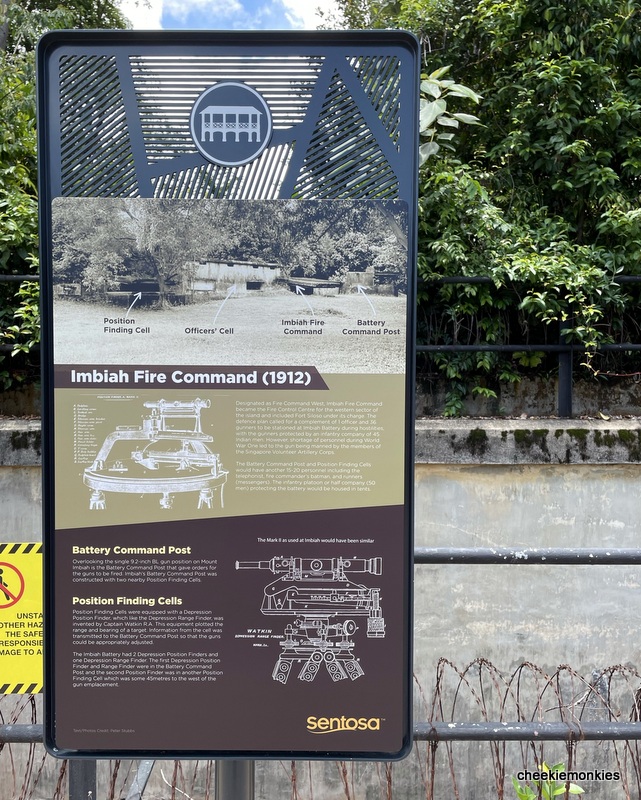 In the early 20th century, Imbiah Battery housed an infantry fortification and a battery with a 9.2-inch breech loading gun. The battery became non-operational in the 1930s, after gun upgrades at Fort Connaught rendered it obsolete. Today, a Battery Command Post, Position Finding Cells and gun emplacements remain, and you can learn more about Imbiah Battery through the information boards here. 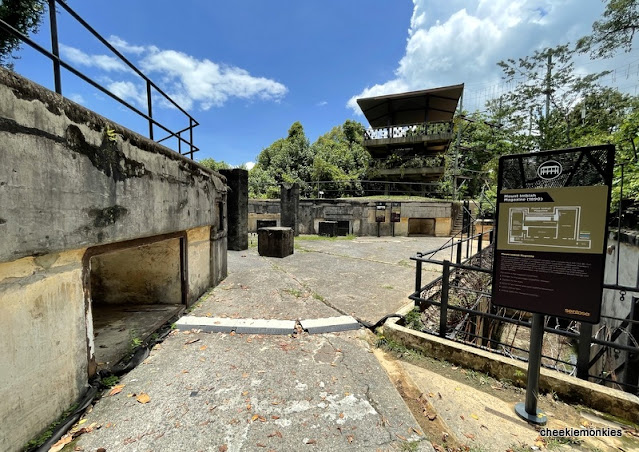 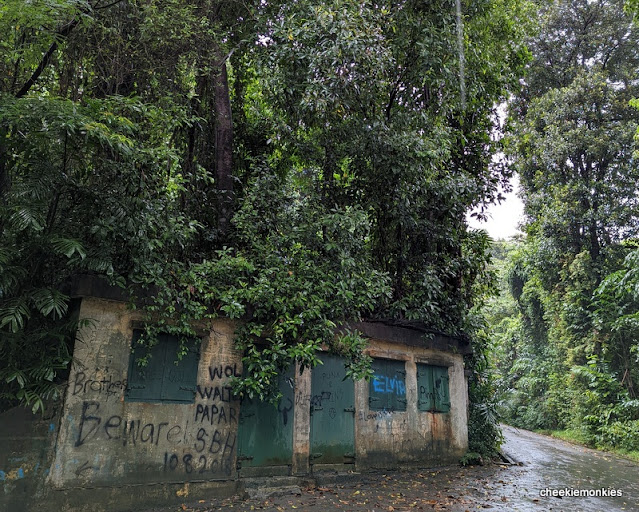 Now this is the most interesting of the lot even though it is located on the other extreme side of the island from Fort Siloso.

Situated a short walk from Sentosa Cove, Fort Serapong lies on the summit of Mount Serapong which is the highest point on the island. The hill afforded a vantage point for artillery batteries. In fact, check out the awesome view once you climb to the top of the hill! 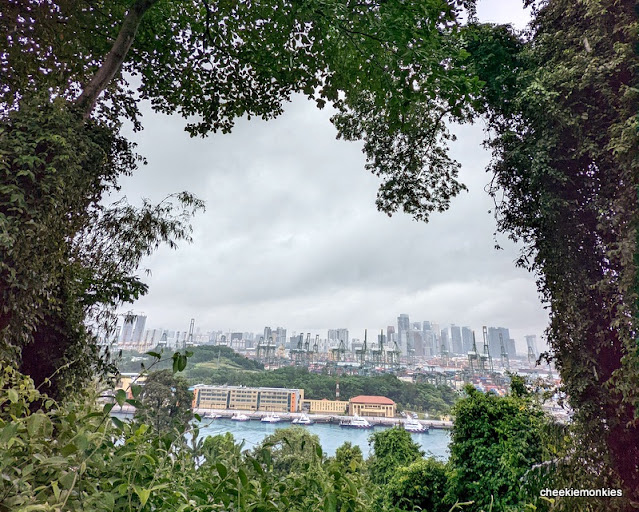 And contrary to belief that the area is off-limits, you can actually visit Fort Serapong! All you have to do is to stay on the road always and do not stray off into the forest. 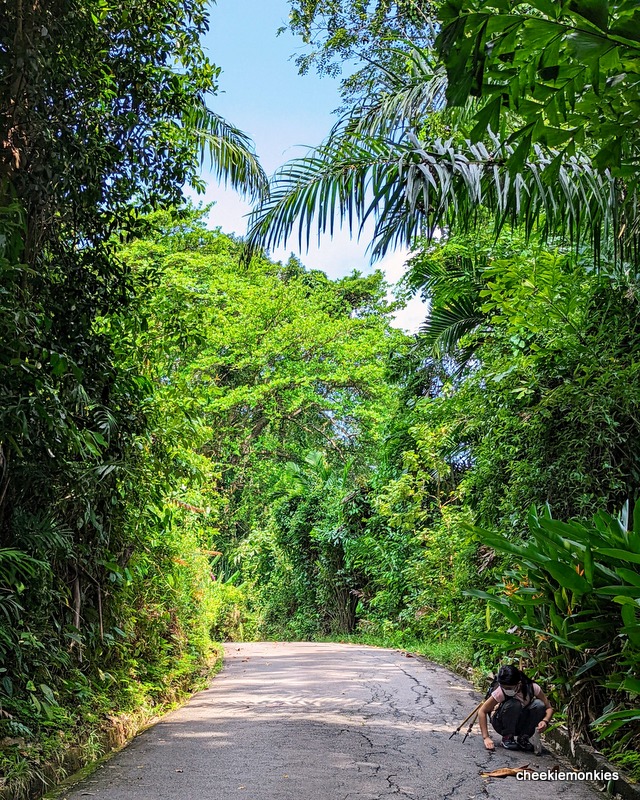 IMPORTANT NOTE: There are TWO parts to Fort Serapong – one part is along the road where everyone can access.

You will be able to view some of the abandoned buildings at certain points along the road like the Spur Battery ruins below.

BUT PLEASE DO NOT STRAY OFF THE ROAD AND ENTER THE BUILDINGS AS THEY MAY SUDDENLY COLLAPSE DUE TO OLD AGE. 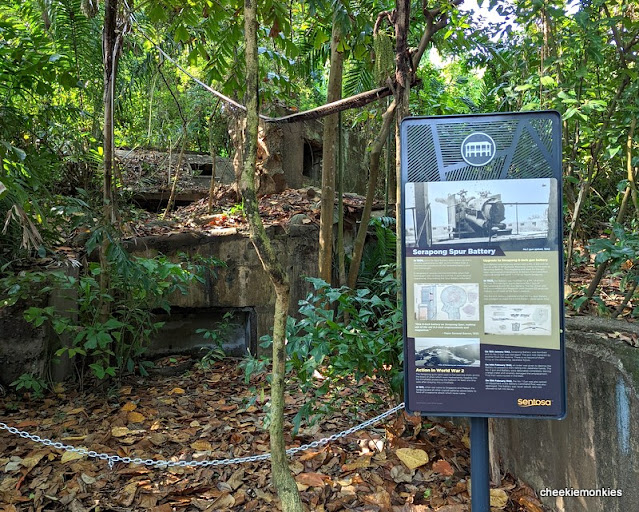 You can learn more about the guns and history of Fort Serapong through information boards along the way. 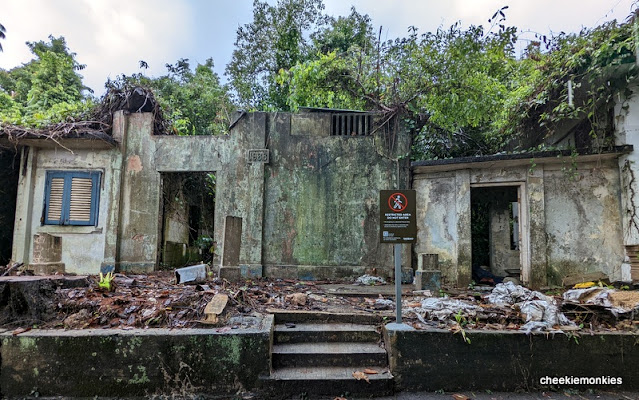 Further up, you will come across a former bathhouse which was built in 1936 (spot the sign in the photo?).

Right beside it, is a row of well-preserved buildings which were once soldiers’ barracks. Now, they serve as storerooms for SDC. 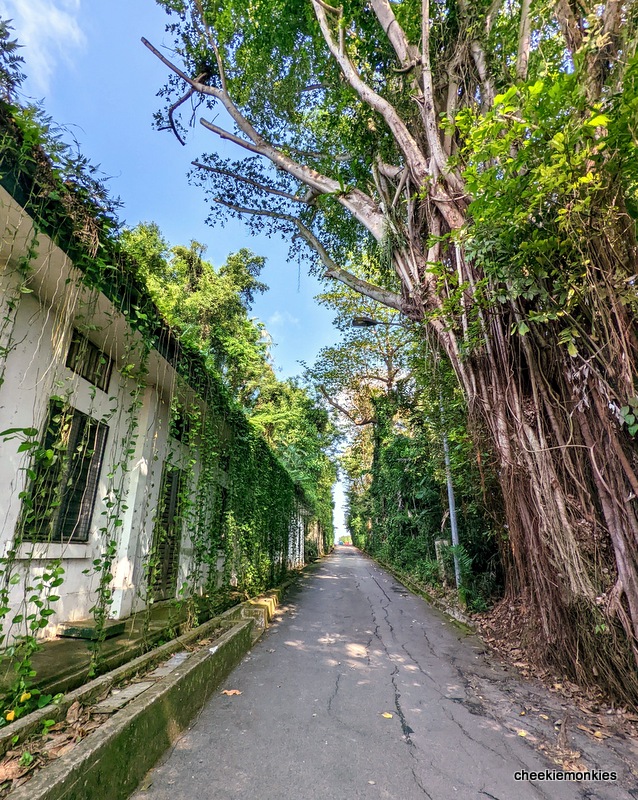 As you walk up the inclined road, you will finally reach the end of the tarmac road.

This is the other part of fort Serapong which lies INSIDE the forest, where other buildings and casemates can be found. The forested area is OUT OF BOUNDS to the public and can only be accessed in the presence of a verified guide under Sentosa. You can sign up for a Fort Serapong Trail tour HERE. 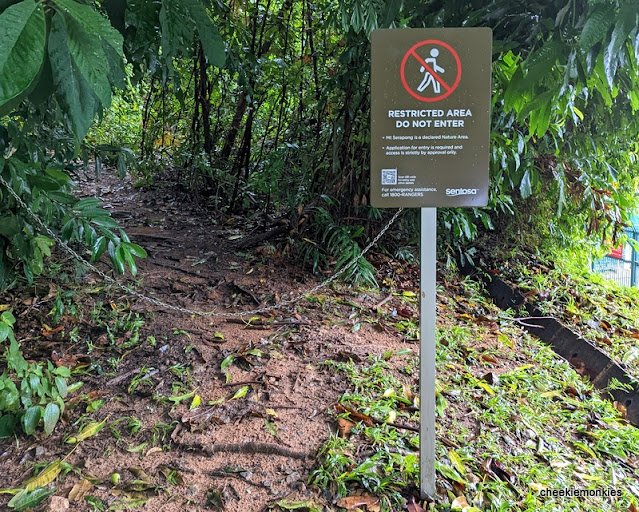 If you are thinking of visiting Fort Serapong, the best way to access it is from Sentosa Cove Village. It is about a 5-min walk from there to the base of Fort Serapong. 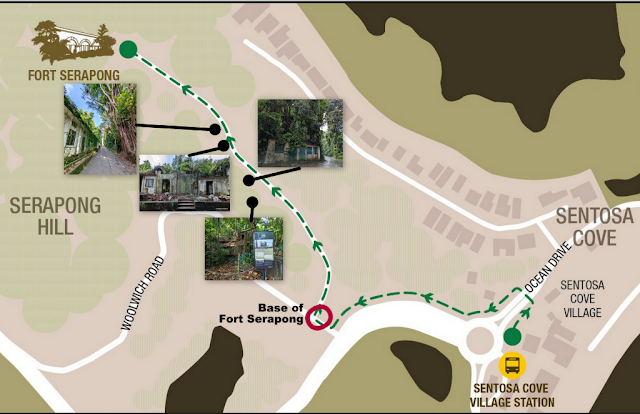 (3km, 2 hours on foot and with public transport)

From the Orang Laut and kampong settlers to British Army personnel, a diverse range of people and communities have called Pulau Blakang Mati home. This route explores the lives and livelihoods of the people of Blakang Mati, as well as their living spaces that included kampongs, barracks, and luxurious bungalows.

Cross Beach View Road to Oasia Resort Sentosa, which contains a former recreation ground and barracks. Between 1878 and 1967, Blakang Mati served as a defence outpost of the British Empire, and housed military personnel including British, Indian and Australian soldiers in barracks and quarters located around the island. Here you will find a trail marker describing how these soldiers lived and worked on Blakang Mati.

● Barracks at the former parade ground 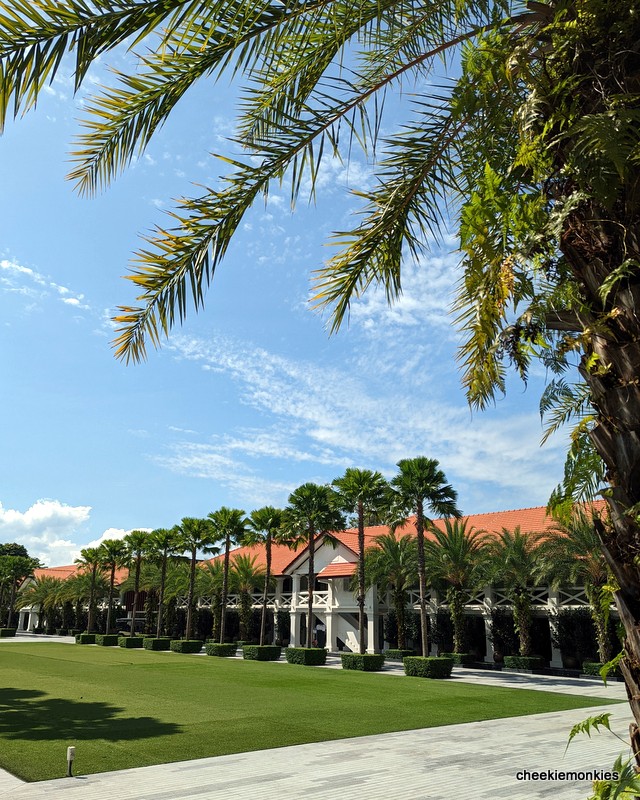 Take the stairs to the left of the hotel building and follow the sheltered walkway to explore barracks at the former parade ground behind Oasia Resort. This area, now part of the Barracks Lawn, was used for training, parades and military ceremonies. 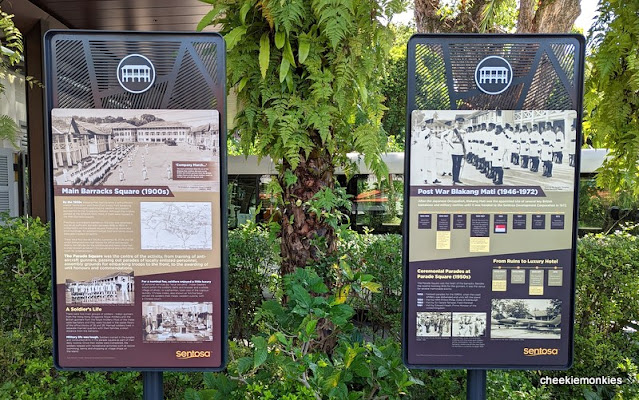 The barracks around it have been conserved and redeveloped into hotels and restaurants, including The Barracks Hotel and Mess Hall. 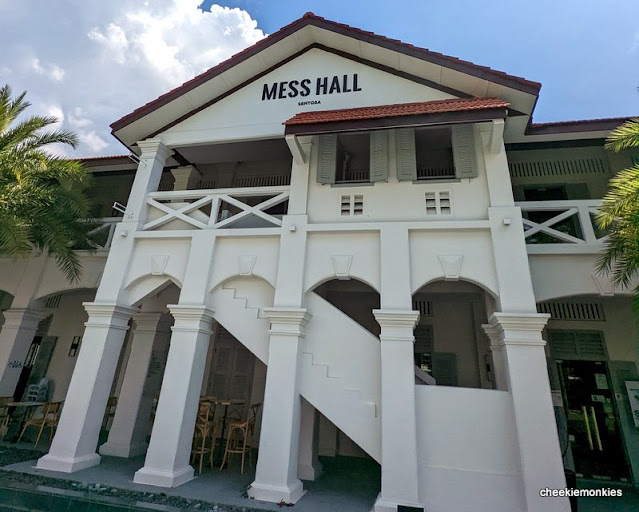 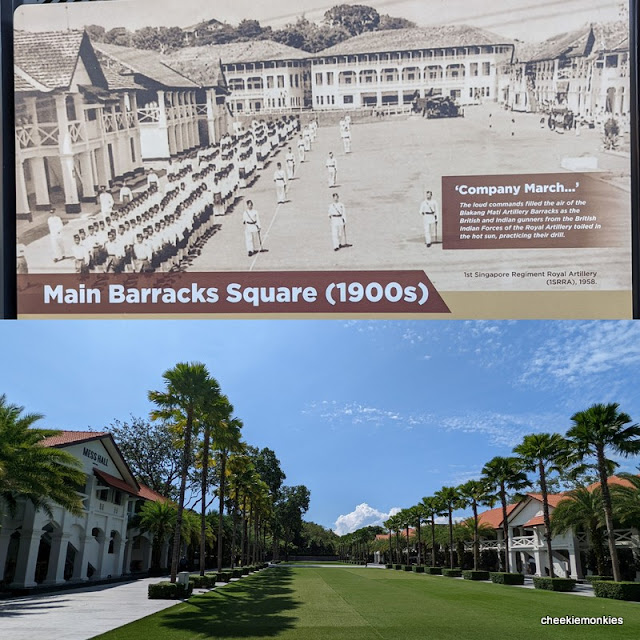 Look out for boot scrapers used by soldiers that remain in front of the barracks (Mess Hall), which were used to scap off mud from the boots before the soldiers entered the buildings. 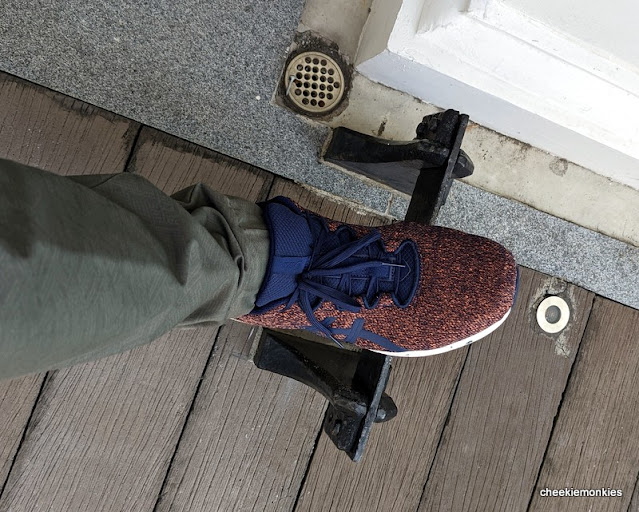 Exit the Barracks Lawn via Gunner Lane and make a right turn at Artillery Avenue. Along this road, you will find a building that formerly served as the Royal Engineers’ Yard, with information boards detailing its history.

Continue along Artillery Avenue until you reach the trail marker for the former Officers’ Mess and quarters, which is now part of Capella Hotel. The hotel development includes colonial bungalows that previously housed officers, including two buildings that now form the hotel’s grand façade, as well as two manor-like bungalows that were reserved for senior officers.

To reach the final stop on this route, head back to Artillery Avenue and take buses A or C to Imbiah Lookout. Head past Sentosa Cable Car Station to arrive at the former military hospital, which now houses Madame Tussauds Singapore. This building was completed in the 1890s and served as the military hospital for British troops. During the Japanese Occupation (1942-1945), the hospital was used as barracks by Japanese troops.

Since the 1970s and following its reinvention as a leisure destination, Sentosa has continually refreshed its attractions to adjust to shifting visitor preferences over the decades. A number of former attractions including the Musical Fountain and the monorail helped define Sentosa in the 1980s and 1990s, and still feature significantly in the social memories of Singaporeans. This trail revisits some of these locations and the memories associated with them.

From the station, head down the stairs to Siloso Beach, one of three beaches with swimming lagoons created by Sentosa Development Corporation (SDC) during the 1970s and 1980s.

Head towards Siloso Beach Walk, and you will come across the entrance to Mount Imbiah Nature Trail on your left. Here you will find a section of the former Sentosa Monorail tracks, as well as a trail marker detailing its history. 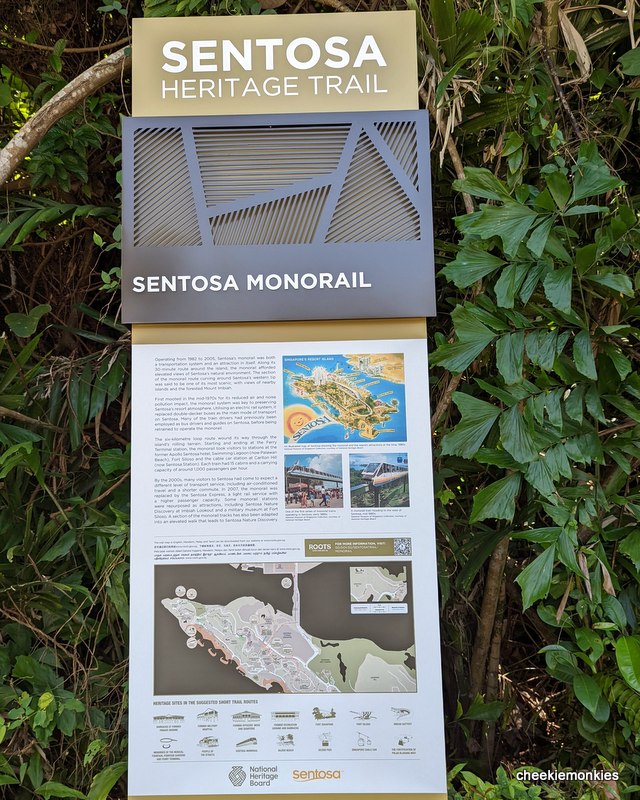 The monorail service operated from 1982 to 2005 and served both as an attraction and as transport on the island. A 30-minute ride around the island afforded scenic views of the island’s varied environments and locations, spanning forests, beaches and the sea as well as man-made attractions. 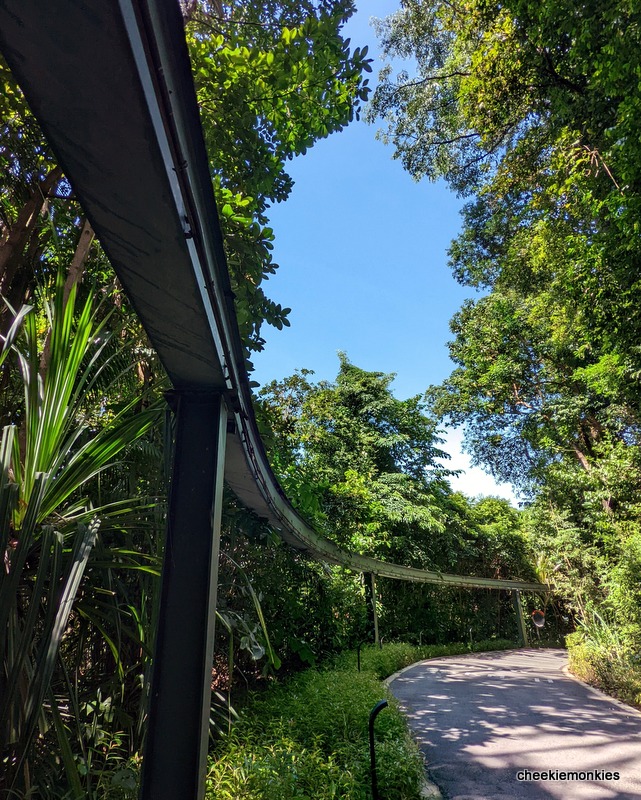 Head into the nature trail and follow the monorail tracks overhead. Cross Imbiah Walk and then make a right turn when you reach the T-junction further ahead. Exit the nature trail at Imbiah Lookout and cross Imbiah Road, before taking the sheltered walkway towards Sentosa Cable Car Station. 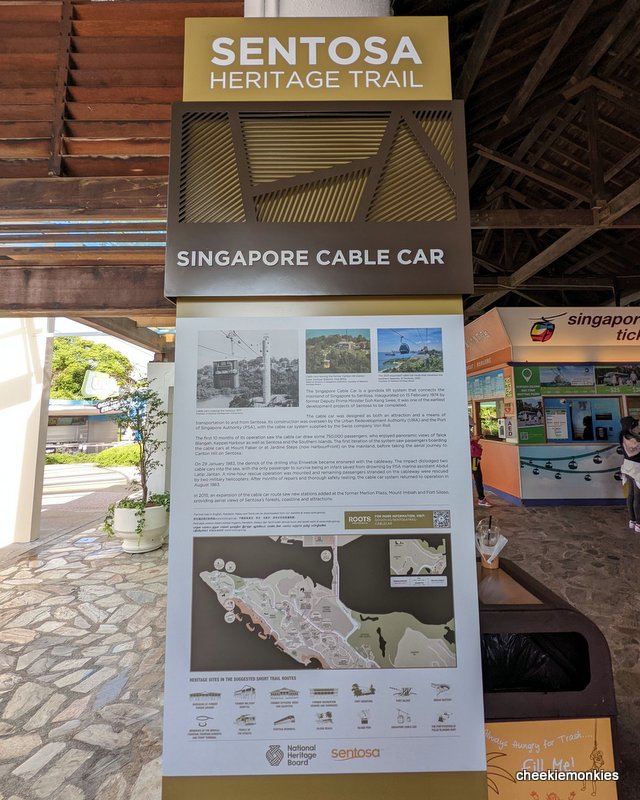 Installed in 1974, the Singapore Cable Car is a gondola lift system connecting mainland Singapore and Sentosa, and quickly became popular for offering panoramic views of the island and surrounding waterways.

From Sentosa Station, take a short stroll towards Madame Tussauds Singapore. This conserved building was a former military hospital for British troops.

● The Musical Fountain, the Ferry Terminal and the Fountain Gardens

To get to the final stop, follow the signs to Resorts World Sentosa (RWS), which is also in the direction of Imbiah Station. Head down the escalators and you’ll find a trail marker for three well-loved attractions that formerly stood in this area from the 1980s: the Musical Fountain, the Ferry Terminal and the Fountain Gardens.

The Musical Fountain drew crowds for its music and laser light shows, and was also a popular concert venue. Completed in 1987, the Ferry Terminal allowed for vessels carrying a larger number of visitors on each trip, while the Fountain Gardens was a scenic thoroughfare designed in the style of 18th century European gardens.

ALL READY TO GO ON THE TRAILS?

DOWNLOAD a copy of the Sentosa Heritage Trail map onto your phone first!